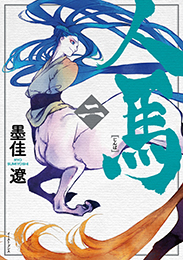 Summary: A centaur race, known as Jimba, have lived in Japan since ancient times. However, humans regard them as tools of war and snatch away their dignity.
During the Sengoku period, a samurai Jimba named Matsukaze, known as the redheaded rock tiger, is caught while protecting his son. He is traded to a feudal lord, and taken to a feudal lord. There he meets another centaur, named Kohibari, whose village was burnt down as a child. He is a tame centaur, and had his arms amputated when he was captured. With his help, Matsukaze escapes with Kohibari. (From MU)