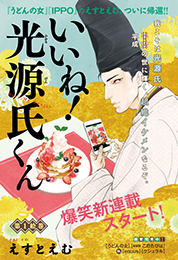 Summary:
Even though this is a story from the recent past…a man who suddenly appeared in my room seems to be “Hikaru Genji.” Yes, the one from the Heian period, the insanely popular young nobleman who is the main character of “Genji Monogatari.”
At first I thought he was a suspicious guy in cosplay, but after I had bashed him over the head with a metal bat, I decided to watch over him for a little bit. Soon he became like a parasite, and if he weren’t so elegant and shy…
Everyday life has become fun.  He started posting waka and such on Twitter, and soon he had lots of followers.
That guy really likes women.  But he hasn’t laid a finger on me. Oh! But it’s not as if I want him to!
Well, I really don’t know why, but it seems as if a gorgeous NEET has come to live with me…? (From the original book cover)